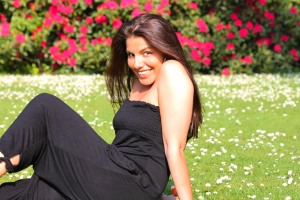 Lorena is currently couched by Neil Semer and Roberta Jo Cunningham in the wonderful city of Berlin. She combines various Lieder concerts in The Netherlands with the studies of her Audition Opera Repertoire.

Lorena Medina was born in Ciutadella de Menorca in Spain and studied with tenor Eduard Giménez at the Conservatory in Barcelona. During this period she combined her singing studies with those of philosophy at the University of Barcelona. Medina received a scholarship from the bank “Sa Nostra” to commence a master’s program at the ArtEZ conservatorium in The Netherlands with soprano Claudia Patacca.

Medina was a soloist in the Young Opera Company of the Conservatory Liceu of Barcelona. She has successfully played the roles of Ganimedes in “Die schöne Galatheé” from Franz von Suppé and Veronique in “ Docteur Miracle” from George Bizet. She also played the rolls of one of the dames in “Die Zauberflute” from Mozart and one of the sirens in “King Arthur” from Purcell and Giacinta in “La Finta Semplice” at the young Opera Company of the Conservatory of Mallorca.

In October 2004 she made her stage debut with the role of Alisa in the Opera “Lucia di Lammermoor” with musicians such as Simón Orfila, Mariola Cantarero and Jorge de León. Since then she performed several operas: «El castell d’iràs i no tornaràs» from Jaume Mas Porcel with soloist such as Itxaro Mentxaka and José M. Zapata; “Il Tabarro” with Salvador Brotons as a director and the Academy Orchestra of “Gran teatre del Liceu”; “West side story” in the role Anita; “Il segreto si Susanna” from Wolf Ferrari with the “Orquest von Oosten” conducted by Kerry Jago.

She has sung as a soloist in two different lieder cycles: “Cinco canciones negras” at the “Teatre del Liceu” of Barcelona, conducted by Guerassim Voronkov, and “Eines fahrenden Gesselen” from Gustav Mahler at the “Palau de la Música”.

Medina has also had a concert tour all over The Netherland, performing lieder works by Bolcom, C. Ives, and Hageman with the pianist Jan van Wijk.